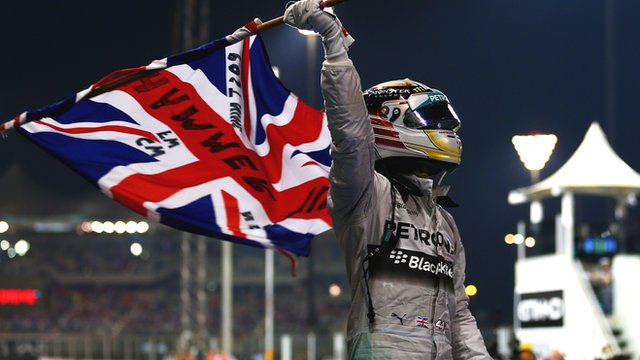 Lewis Hamilton clinched his second drivers’ World Championship with a comfortable victory in the season-ending Abu Dhabi Grand Prix.
The 2008 champion became only the fourth Briton to win two world titles.
Hamilton, second in qualifying, took the lead at the start and controlled the race, as Mercedes team-mate and title rival Nico Rosberg suffered car trouble and finished 14th.
“This is the greatest day of my life,” the 29 year-old said.
“2008 was a great year in my life. The feeling I have now is way, way past that. The greatest feeling ever.”
Hamilton moves level with Britons Jim Clark and Graham Hill on two titles, and is one behind Sir Jackie Stewart.
The Englishman’s win was his 11th of the season, compared to Rosberg’s five, and he finished 67 points clear at the top of the title standings. It was the 33rd win of Hamilton’s career, moving him clear of his great rival Fernando Alonso into fifth in the all-time list.
Rosberg, who entered the race needing to win and hope Hamilton finished lower than second in order to win the title, was never in the position he needed to overhaul his rival.
Play media
Lewis Hamilton: Second championship doesn’t feel real
While Hamilton made a perfect start to the day-night race under the setting sun at the impressive Yas Marina circuit, Rosberg’s Mercedes bogged down and the Briton was into the lead well before braking for the first corner.
Hamilton completed the first lap 1.2 seconds in front, and inched clear until he was 2.7 seconds in front by the time he made his first pit stop on lap 10, always giving the impression of being in control.
The gap stayed at about that margin until lap 23, about half-distance, when Rosberg suffered a failure of the energy recovery system on his Mercedes.
From then on, it was a matter of damage limitation for Rosberg, who asked his team to tell him what he needed to do to finish in the top five – the result that would give him the title should Hamilton retire.
He joins a number of other drivers on two titles, including his great contemporary rival Fernando Alonso. Michael Schumacher is the all-time record holder with seven, while the most successful current driver is Sebastian Vettel on four.
Rosberg, who started on pole, was left struggling by the failure of his hybrid system. With two laps to go, he was told to retire by his engineers at Mercedes but said: “I would like to go to the end.”
As Hamilton crossed the line, Prince Harry, attending the race, took to the team radio to say: “Lewis, well done for not making the British public sweat. You are an absolute legend.”
Hamilton stood on his car to celebrate after he returned to the pits and then went over to embrace girlfriend Nicole Scherzinger and his family, who had flown in for the race day to support him.