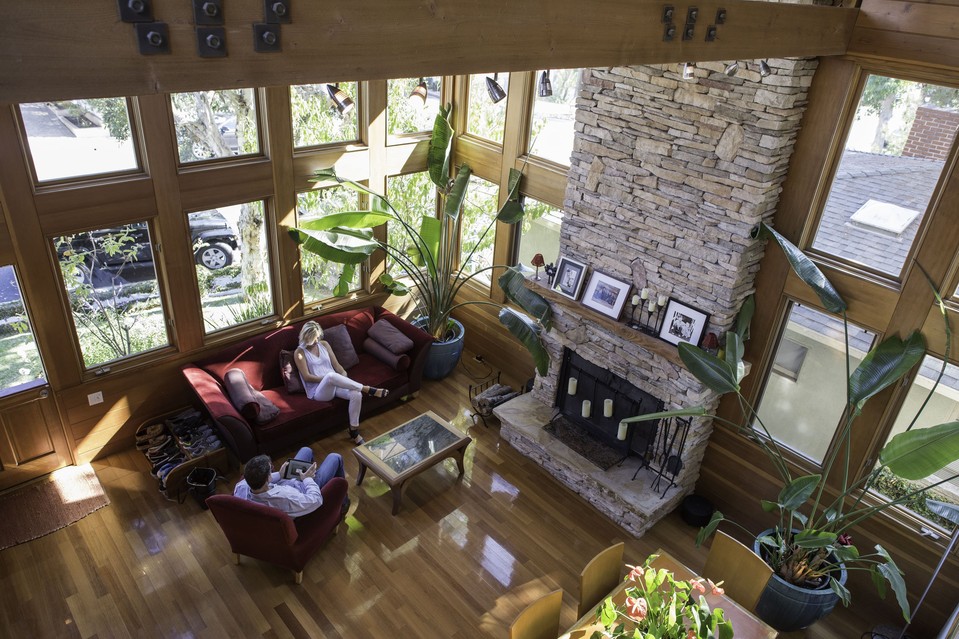 Stephen Francis Jones, a restaurant designer in Los Angeles, initially had trouble describing the 3,000-square-foot Manhattan Beach house he built for his family. While its copper flashing, exposed trusses and cultured-stone exterior pay homage to craftsman style, the house’s huge windows and open floor plan reflect the architect’s love of light and flowing spaces.
“I came up with ‘contemporary craftsman.’ I describe it that way because that’s what people understand,” said Mr. Jones, 52.
Purists may scoff, but buyers and builders are mixing and matching craftsman elements, such as exposed rafters and natural stone, with contemporary floor plans and high ceilings. Photo: Planomatic.
Craftsman is a term given to homes largely built between 1905 and the early 1920s, said Ted Bosley, director of the Gamble House, a National Historic Landmark in Pasadena, Calif., that is considered a prime example of craftsman architecture. Craftsmans were the American expression of the Arts & Crafts movement that originated in England as a reaction against the perceived soullessness of the Industrial Revolution, Mr. Bosley said. The movement placed high value on handmade work, uniqueness and natural materials.
These values are seen in craftsman architecture by “articulation of structure,” such as exposed rafters and beams; abundant use of stone and wood; and a connection between the interior and exterior, often through porches and terraces, Mr. Bosley said.
Craftsman houses fell out of fashion in the 1920s, but became trendy again in the mid-1980s, Mr. Bosley said. Today, the style is growing in popularity: Houseplans.com, a large online seller of blueprints, said 25% of the plans it sold in the last quarter were craftsman, compared with 19% in the same period a year prior.
“In the last five years, I’ve seen this style explode on the East Coast,” where it was previously little-used, said Tim Gehman, director of design for Toll Architecture, a unit of luxury builder Toll Brothers .