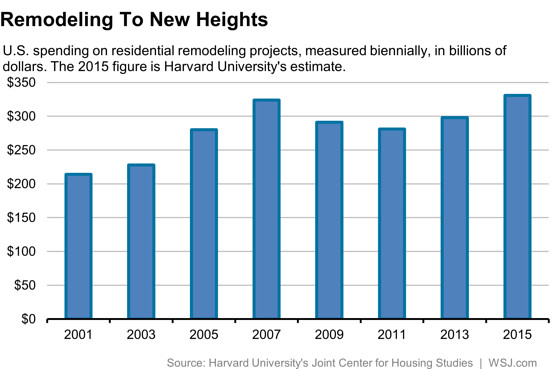 The overall U.S. housing market still is struggling to hit its stride, but the remodeling market meanwhile has fully regained its mojo, according to a report released Thursday by the Harvard University Joint Center for Housing Studies.
Kermit Baker, director of the center’s remodeling futures program, forecasts that spending in the U.S. remodeling market will grow by 4% to 5% this year to at least $330 billion, spanning work on both owned homes and rentals. That’s a slower growth rate than in previous years of the recovery, but it would be enough to make 2015 the richest year for remodeling spending of the past 15, surpassing the previous high point of $324 billion in 2007.
“The market is largely recovered,” Mr. Baker said. “It will resume growth at its historical level, which has been (an average of ) just about 5% year over year for the past 30 years.” The main reason: A similar easing of home-price appreciation. The median resale price of existing homes last month of $209,500 marked a 6% increase from a year earlier. In comparison, the increase in 2013 was nearly 10%. Homeowners are less likely to push ahead with an ambitious, pricey renovation if their home equity isn’t growing as rapidly anymore.
Another factor sapping a bit of momentum from the robust remodeling market is that homeowners don’t have as much motivation now as they did in previous years to install energy-efficient windows, doors and other features in their house, Mr. Baker said. Part of that is because federal tax credits for such improvements have waned. An additional influence is that energy costs, particularly for gas for heating homes, have declined markedly in recent months.
Still other factors will have the opposite effect, keeping remodeling spending from reversing course. Mr. Baker notes that more Baby Boomers are remodeling as they opt to stay in their long-time homes and equip them with handrails, elevators, first-floor bedrooms and other aging-in-place features.
Meanwhile, the remodeling market has listed in recent years toward bigger-ticket, discretionary jobs, including kitchen and bathroom upgrades. The share of overall remodeling spending attributable to such discretionary projects accounted for 30% of remodeling spending on owned homes in 2013, up by roughly a percentage point from 2011, Mr. Baker said. He anticipates that share will continue to grow this year, though he hasn’t forecast a specific percentage.
The increase in discretionary remodeling is mostly due to home price appreciation since 2012, Mr. Baker said.
“Spending on home improvements and housing prices almost perfectly relate; About 1% of the value of a home is used on home improvement,” he said. “Prices have come back up, so we think spending came up with that.”
Mr. Baker compiled his figures on remodeling spending based on data from the Commerce Department, the Department of Housing and Urban Development and Harvard research.